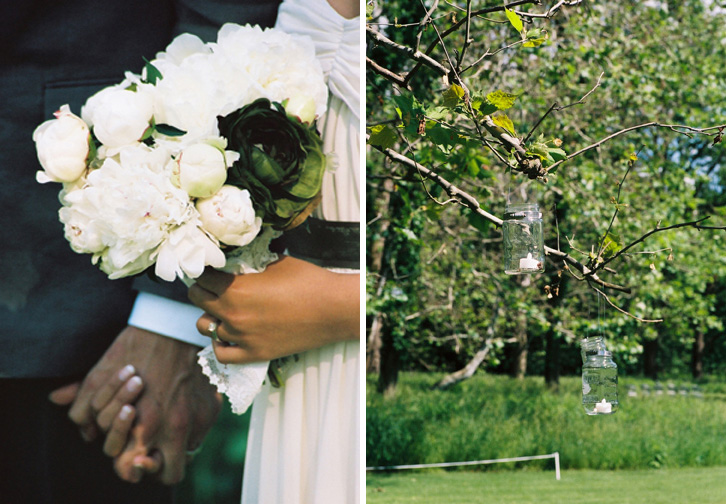 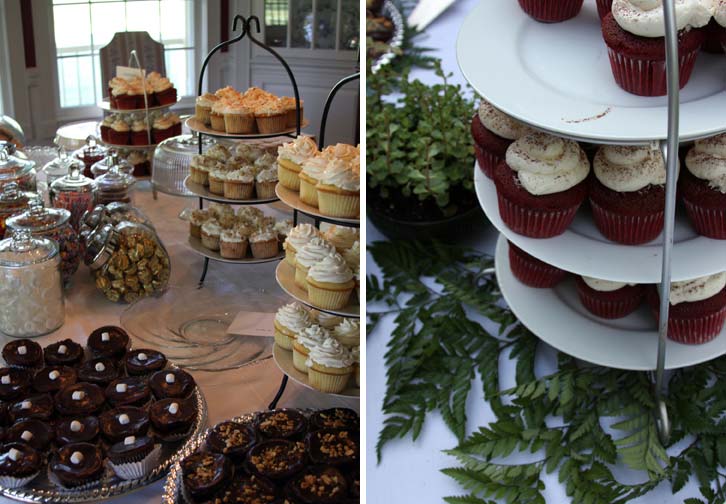 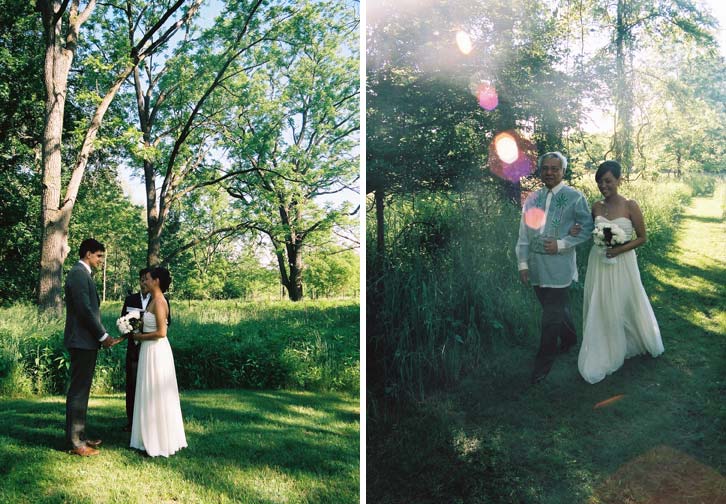 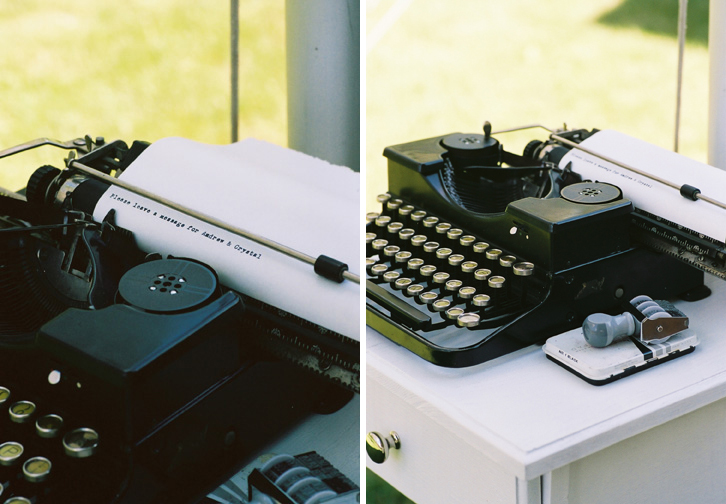 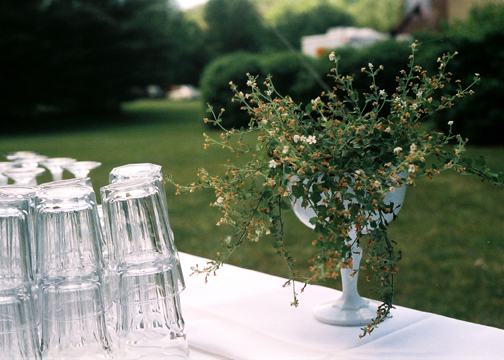 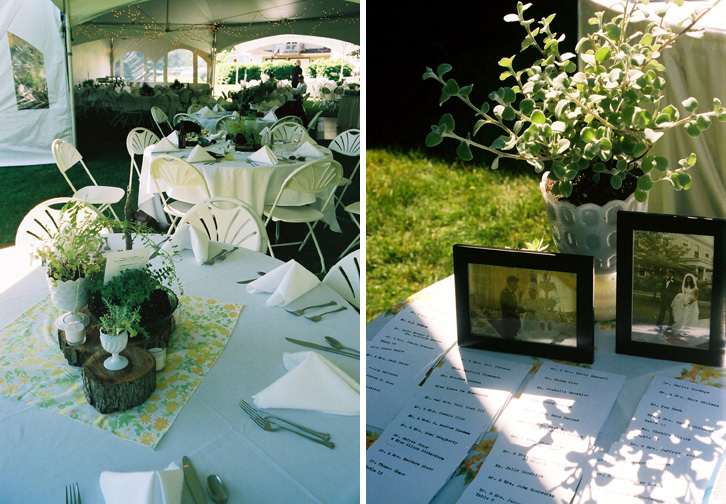 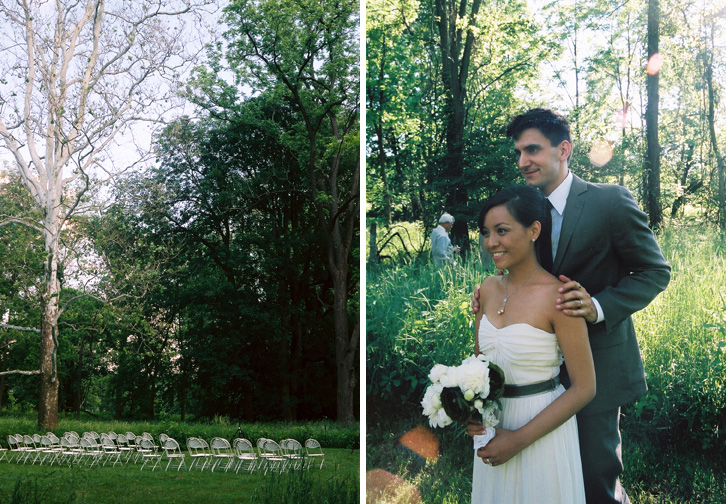 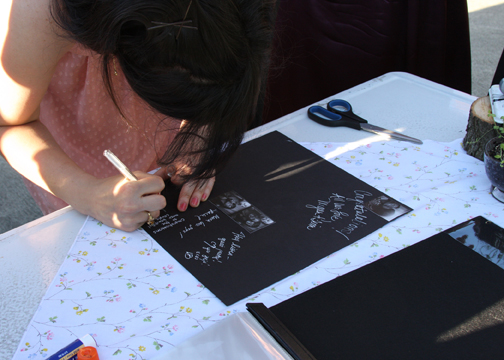 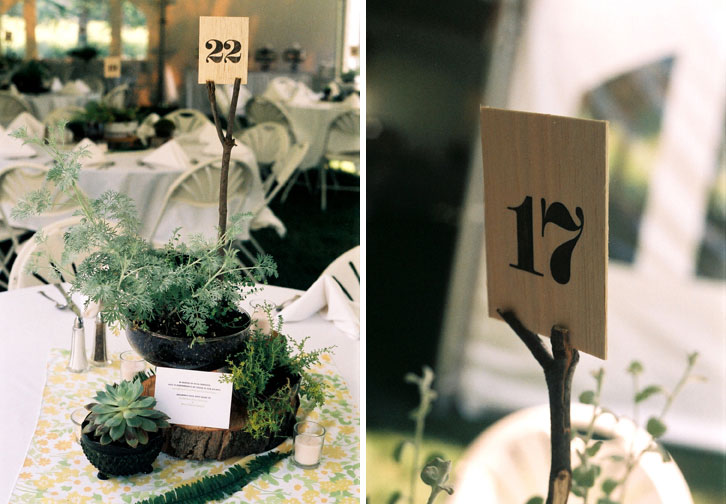 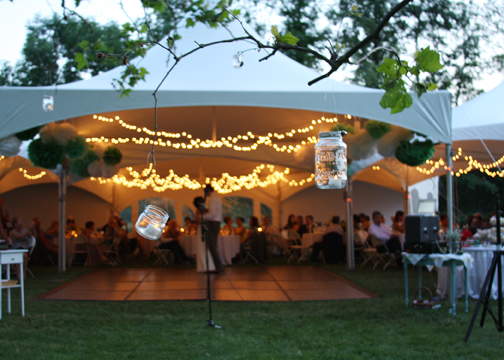 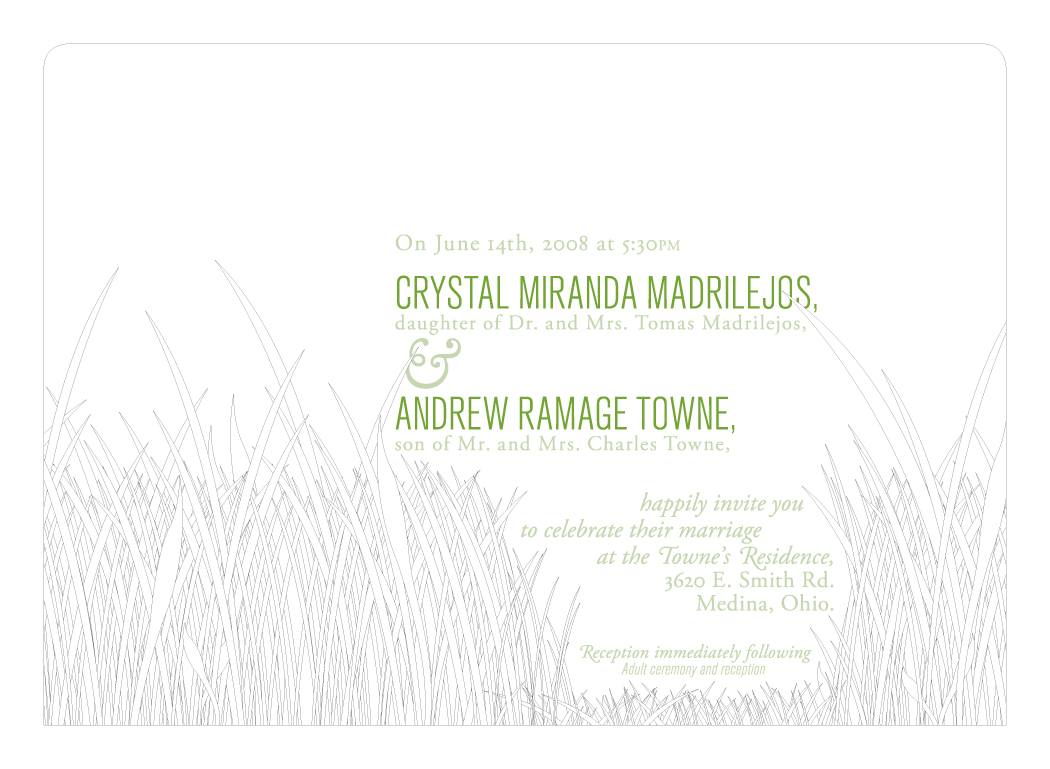 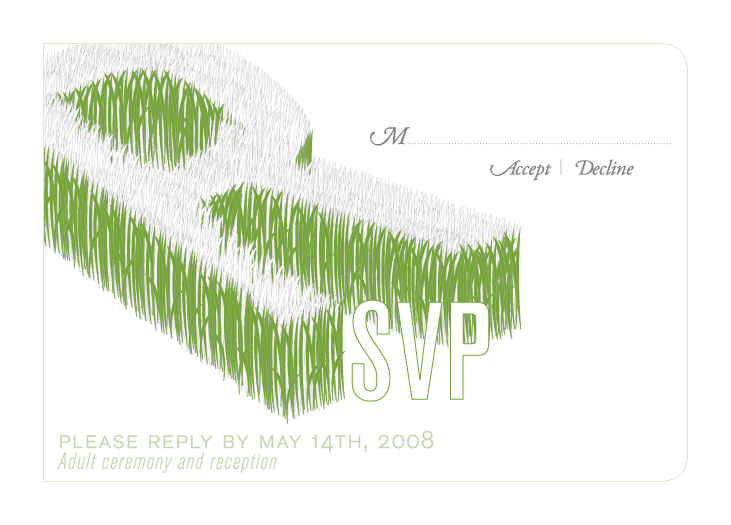 I got this wedding yesterday from Crystal and loved every single detail! Don’t worry, many more pictures to come later today….

Invitations: Being a graphic designer by trade, I couldn’t help but take on this challenge. The invitations have a grass theme that was kind of a foreshadowing of the actual event. The invitations were printed by a local printer in Medina.

Ceremony: Andrew’s parent’s house sits on 50 acres of land just outside the Medina city limits. Finding the perfect spot for the ceremony wasn’t hard because the location is so beautiful. We decided to have the ceremony in an area just within the forest line with the trees towering over us. Up until we decided to exchange our vows in this spot, it was just a lot of grass and weeds that Andrew’s parents let grow wild. So we, and Andrew’s parents, mowed the ceremony spot and an aisle for a whole year before the wedding date as the rest of the vegetation around it grew tall.

Reception: The reception was at the same place as the ceremony, in Andrew’s parent’s yard. We had three large tents to seat about 250 guests (we both have large extended families) and the food and drinks were catered by a local restaurant, Medina Steakhouse & Saloon.

Decorations and Flowers: We didn’t want to have traditional flowers so we decided to go with just greenery (other than my bouquet which were peonies cut from bushes in our yard). Each centerpiece was unique and consisted of 3-4 individual planters in either green, white or clear vintage glass. Ohio being the mecca of thrift stores, we were able to buy all these containers for around $100. Me and my sisters put together every one of the planters, which were a mix of everything from moss to succulents. While we were planting, the guys went in search of fallen trees in the woods to cut into slices that were used to raise the planters to different levels. Underneath the centerpieces we had different patterned squares of vintage fabric. The table numbers were xerox transfers on balsa wood that we set into Y-shaped tree branches that we gathered. We also made lanterns from old jars and hung them from the big sycamore tree that is the focal point of the backyard.

Dress + Shoes: My dress was made by a Brooklyn-based fashion designer, Laura Budde. She is a great friend and an amazing designer. The dress turned out perfect. I wanted something very simple and feminine with color incorporated into it. And flowing! The shoes were Anna Sui from Anthropologie. They were leather, almost like running shoes, with leather flower accents all over them. Weird sounding, i know, but they were so cool.

Photography: Lauren Crew (www.crewscontrl.com) took our photos. Lauren was my Photo Editor at a magazine that I was Art Director for in NYC so I already knew that she was an amazing photographer. She isn’t a traditional wedding photographer, which is exactly what we were looking for. She shot both film and digital and we are extremely happy with how they turned out.
Desserts: I am a huge dessert person with the biggest sweet tooth! I wanted an elaborate spread with cakes and candy and cookies as far as the eye could see. And that’s pretty much what we got! A good friend of the family, Amy Ash, made the majority of the baked good. Her family is known for their magic touch in the kitchen and they did not disappoint with their Red Velvet Cupcakes, Carrot Cake, Lemon Cake, Chocolate Peanut Butter Cupcakes, Chocolate Marshmallow Cupcakes, Classic White Cupcakes, Italian Creme Cupcakes!

Favors: One of the very first decisions that we made was to get a photo booth (a “real” black and white, film kind). We used Photobooth Scrapbooks (www.photoboothscrapbooks.com) and were very happy with them.

Extra Touches: For a guest book we used a vintage typewriter that we got from Andrew’s grandparents with a long roll of paper. The best thing about it were the drunk messages people left for us by the end of the night. The most popular message: Don’t go to bed angry. Thanks, we’ll remember that.